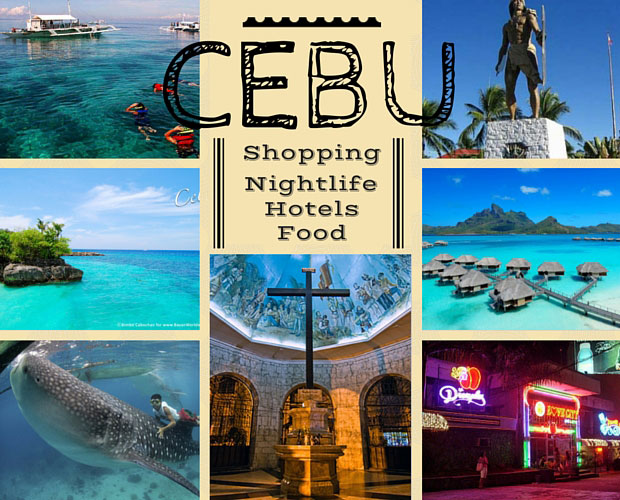 Cebu is the fastest growing metropolis outside of Metro Manila. Located in the middle of Visayas, the island is a commercial hub that contains the country’s second international airport, which is the most important transport in the Visayas and Mindanao. Cebu is also a center of the shipping industry, with 80% of the country’s shipping industry based in this “  Queen City.”

Although known popularly as a cosmopolitan arena for business and industry. Cebu’s golf courses are known to offer travelers a great escape from city life. The province us replete with white-sand beaches that never fail to attract tourist and locals alike. Neighboring  islands are a popular destination for beach-lovers, and the nearby island of Mactan is a favorite among people who want to experience the sun and surf without going too far away from the city, and Cebu has a host of lookout points and bars that offer a fantastic view.

SOME FACTS ABOUT CEBU

Cebu was discovered by Ferdinand Magellan  who, having sailed into the harbor of Mactan, was slain by Lapu – Lapu, the chieftain of Mactan island. Years later, the Spanish Christianity in the Philippines. What once was a fishing village and busy trading port in 1521 has evolved into a highly urbanized metropolitan center which now serves as a focal point of growth and development southern Philippines real estate. Up until  today, Cebu is still referred to as the “Queen City of the South.”

Three million people reside in the province of Cebu. The main language is Cebuano, although a fairly good number of locals can speak conversational English as well as Filipino, Cebuanos can be quite friendly and hospitable, but most are known to be very economical in their spending.

The weather in Cebu is best from December to May, when it isn’t wet or too hot. The coolest period is from Decemberto February, the hottest from March until May.

Just 20 mins away from Cebu Country Club, the Magellan’s Cross is Cebu’s most popular tourist destination. Being the cradle of Christianity in the country, the kiosk behind the Sto. Nino Basilica in downtown Cebu enshrines the famed cross that made believers of the Filipinos. It is a historical landmark that serves as a reminder of the power and pervasiveness of the Catholic Church in the Philippines.

Still in downtown Cebu is Fort San Pedro, another historical landmark that showcases Spanish memorabilia left over from the Spanish colonial period. It was once a bulwark of Spain’s power in Cebu. Today it serves as a vestige of past colonial command.

Because the Spaniards were the most enduring colonizers in Philippines history, it is their influence that is most apparent in society. Casa Gorordo is a testament to Spanish cultural influence, being a museum of artifacts of old that have carried over into centuries of use and adoption. This house turned-museum gives a glimpse of life during heavy Spanish influence.

People are quickly realizing that Cebu’s best beaches are actually three .hours away from Cebu City and are found in Bantayan and Malapascua islanads. Both beachfront still carry a virgin quality that appears to many a traveler, and so in recent years they have ironically been subjected to progress and development. Located north of Cebu, these neighboring paradise getaways have but a few resorts just yet, which nonetheless attract a bevy of beachcombers and vacationers.
SPECIAL ATTRACTION

The measure of cosmopolitan capitalism should be Starbucks, something Cebu acquired in recent years to ride the wave of booming commercialism. 30 minutes out from Alta Vista Golf and Country Club, is the first branch just opened outside of the Ayala Entertainment Center. Annexed to the Ayala Mall, the Entertainment Center is an area full of bars, restaurants and other late night joints where the partying begins as soon as dinner ends.

Crossroads in Banilad offers the same mix of dinner and dancing, but with a different flavor. The bars there carry s steadier groove, and the coffee shops are more appealing to the younger crowd because of the social leverage they serve, rather  than the coffee.

The Village in Lahug has a courtyard in the middle of a block surrounded by bars, restaurants and coffee shops. Bands perform regularly in the courtyard, while other establishments attract customers with breezy outdoor set-ups. The latest to join in the Cebu nightlife directory is the Banilad Town Center, a commercial complex that includes a gym boutiques in its lineup of bars and restaurants.

One of the better options Cebu’s nightlife offers is the backdrop of a breathtaking nightscape amidst a round of drinks. Drinking stops, hangouts and lookout points dot the elevated setting of Busay Hills, making it a great place to chill and catch the breeze under a brilliant nightsky while appreciating the expense of Cebu’s horizon.

Not all of Cebu’s nighttime joints are congregated together, in fact some of the better ones are in a place all their own somewhere in the heart of the city. Most of them can be spotted alongside city streets-just look for bright lights and crowd.

Filipinos have a penchant for enormous shopping malls, and Cebu certainly isn’t exempt from this surfeit of merchandising madness. SM City is one of the may gigantic shopping malls of the SM line in the country. Ayala Center is another  representation of yet another of the Philippines’ mall magnate’s metropolitan fixtures. More known for its department stores are the Gaisano branches, with its Metro Ayala branch being the most popular and convenient source of inexpensive and imported goods.

Shopping for local products and delicacies will take the earnest traveler to the unglamorous marketplace of Cebu, Carbon market is located in downtown Cebu, and it consists of a number of street vendors hawking everything from used clothes to vegetables, It’s a cheap place to buy the famed Cebu mangoes and the well reputed Cebu guitar. Tabu-an is a separate area that sells anything and everything dried under the sun. dried salted fish , popularly known as danggi, is cheapest in Tabu-an market.

Cebu is renowned for its exemptional dive spots. Many hotel guests near the Mactan Island Golf and resorts dive in and nearby marine sanctuary of Gilutungan and Nalusuan. A few hours away from the city, there is Moalbal Reef – famous for its colorful coral reefs and cave diving. To the north of Cebu is Malapascua Island, a favorite among more adventurous divers because of the roaming thresher sharks.

Since Cebu is an island, there are all sorts of water sports and activities offered in the different beaches and resorts. One can go kayaking, water-skiing , parasailing, banana-boating, snorkeling or just plain swimming in the beach. The seabreeze around Mactan makes windsurfing a popular sport among tourists.

Smaller islands surround the main island of Cebu, and some of them are definitely worth visiting. Taking a banca (outrigger) from Mactan island is deal as it makes visiting the neighboring islands rock islands, mangroves and other marine treasures can be seen while riding the waves along the coastline. Island hopping is particularly fun with food and drinks inside the boat, and one has the luxury of swimming wherever and whenever and the water is clear and enticing.

~Adventure Trips hiking, rappelling, spelunking and all those adventurous activities can be arranged with the right contacts. The hotel concierge should be able to help out in arranging for a licensed or freelance guide to wonders. The south of Cebu has caves, mountains, springs and waterfalls that are exciting to explor and discover.

Cebu offers a variety of world-class hotels and resorts, all strategically located around the province. In the city, there is the massive Waterfront Hotel and the Marriot Hotel, both conveniently located in the city’s commercial center. In Mactan island, just half an hour’s drive from Cebu City, there is the crowd favorite Shangri-la Mactan Island Resort, the tropical paradise Plantation Bay Resort and Spa, and the newly inaugurated Hilton Cebu and Spa. In the farther reaches of Cebu are more well-kept vacation hideaways. Alegre Resort is two hours north from the city, while Pulchra is located an hour and a half south.

It us of course possible to visit Cebu without going all out with accommodation expenses. There are a number of mid-range hotels located around the city, as well as pension houses that go for an even cheaper price. Many of them are located along busy city streets, and shouldn’t be hard to find since there is a myriad of them strewn about the metropolis.
DINING

Visitors love Cebu for its succulent food at great prices. While some grilled eateries and barbeque stands are institutions in themselves, the epicures of this island getaway are not unfamiliar with international gourmet cuisine. Still, Cebu is best remembered for its abundance of outdoor grills that tease the plate with fumes of lechon (roasted pig) and grilled seafood that’s sure to find its way to any wandering food-lover’s senses.

A.S. Fortuna is a long road that has such restaurants on every corner. The food  choices range from barbequed chicken to grilled squid to local staples such as puso (hanging rice) and ngohiong (deep-fried pork and vegetable roll). Lechon and Lechon manok (roasted chicken) outlets are located just about anywhere. Puso is rice wrapped in banana leaves, and is a specialty that is largely known as a Cebuano novelty.

For upscale choices, there are restaurants that specialize in cross-cultural or mixed-cuisine dining. The hotels carry top-of –the-line international cuisine, while the mall and entertainment centers offer a good variety of food and flavor. Ayala Mall host all sorts of restaurants, from fast-food Filipino to Continental dining. Crossroads has an assortment of Asian fare, while The Village carries European cooking. Dimsum is also popular in Cebu City, with the Ding Qua Qua Chain at the forefront of Chinese culinary tastes.

Cebuanos take their food seriously, and so there are all sorts of eateries situated in every possible locale, from the tiny streets of small villages to the sidewalks of main throughfares. The best way to find a satisfying meal is to ask a local. More often than not, Cebuanos are familiar with their food.

HOW TO GET TO CEBU

Cebu is 365 miles south of Manila. To get there, one can either take the plane or boat. Local airlines fly there several times daily. Traveling by air takes one hour. Taking the boat is generally less expensive, but the trip takes about 20 hours aboard a local cruise liner or slow boat.

Superferry and Sulpicio Lines are the bigger slow boats that sail to Cebu almost every day. Arrival is at the port of Cebu in the North Reclamation Area of the city. For trips outside Cebu, fast crafts are available for journeys to neighboring islands and provinces.