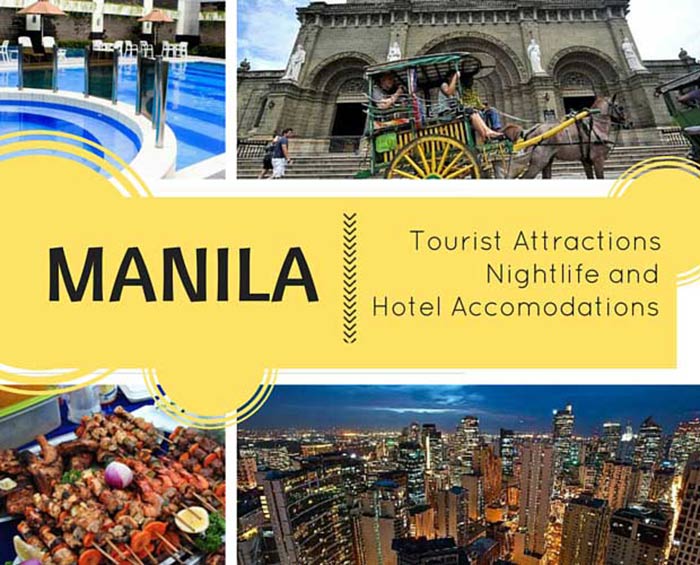 The weather is great, the people are fantastic and there are so many great courses to choose from.

But what is there to do, when you are done golfing in Manila?

The capital of the Philippines is Manila. It sets the archipelago’s rhythm and is a pulsating hub that blends the Oriental with the Occidental, the quaint with the modern, the religious with the profane, and the mundane with the extraordinary.

Manila has been witness to the Philippines’ history and growth. It was plagued with bombs during the Second World War, and has housed 14 presidents. Its beauty has withstood the test of time

At the heart of Manila’s history is Intramuros. It features the grand Manila Cathedral with its detailed stone carvings and stained glass mosaics; Fort Santiago, the site of torture chamber and dungeons; and a favorite wedding spot, the San Agustin Church.

Greater Manila, made up of 11 cities and five towns, us where the country’s most prestigious business addresses and trendiest leisure establishments are found. Fashionable hotels, restaurants, discos, music bars, boutique and specialty shops converge around the sleek Ayala and Ortigas Centers.

Other major cities include Quezon City, also an entertainment hub as well as a government center; Marikina City, the shoe center of the Philippines; Paranaque City, known for its dry goods and seafood markets and restaurants; and Las Pinas City, which houses the world’s only bamboo organ at St. Joseph’s Parish Church.

Calabarzon, which is my favorite area to golf compromised of the five provinces of Cavite, Laguna, Batanggas, Rizal and Quezon, is only a few hours away from Manila. The area boasts of great destinations and leisure activities for day trips or overnight gateways as well as export processing centers.

Located at the former Senate building, it houses many artworks by renowned Filipino artists, including Juan Luna’ Spoliarium.

~Museum of the Filipino People

Located almost beside the National Museum, it houses artifacts from different regions of the Philippines displaying the diverse and colorful culture this archipelago has to offer.

This walled city steeped in Old Spanish history is where several Spanish churches and other landmarks are located, such as the Manila Cathedral, San Agustin Church with its 4,500-pipe organ, and the parks such as the Puerta Real Gardens and the Baluarte de San Diego.

Did we forget to mention that there is a golf course built right inside of this place?

Here is where you can see the monument of National Hero Dr. Jose Rizal. A few meters away is a Light and Sound Show, held at the exact place where he was executed. It is also a great place to stroll ad enjoy picnics with your family.

The coconut tree are put to use in this by the sea.

It is an establishment bargain loves’ paradise with rows upon rows of stands selling almost everything, from jewelry and clothes to accessories and the latest electronic gadgets.

Home of the Black  Nazarene whose feast is celebrated every January 9, and attended by millions of devotees who have been touched by the Nazarene’s miracles. The Black Nazarene is an image of Christ brought by Augustinians in the 17th century, and is also a haven for bargains.

Located is St. Joseph Church in Las Pinas, the bamboo organ gets full attention from musicians from all over the world during its annual festival.

The presidential home and seat of the government’s executive branch.

Check out one of the most historic zoo’s in Asia. Make sure you use Zoo Discount Coupons.

Found along Roxas Boulevard, it is a perfect haven for lovers and families alike. It has a stream of al fresco restaurants serving fresh seafood and other Filipino cuisine. It is best to go here in the afternoon, just in time to see the spectacular sunset mirrored on the Manila Bay.

Famous for its night life, where almost all bars, restaurants and clubs are located.

Located in the Binondo district, Chinatown symbolizes the long history of Chinese presence in the Philippines pre-dating the arrival of the Spaniards. The Chinese have especially in reatail trade and their culture, which have been absorbed into Philippine life.

Members of the Filipino-Chinese community have mausoleums three stories high, complete with amenities like living rooms, bedrooms, bathrooms, kitchens and even mailboxes.

Only a few hour’s drive from Manila is the refreshing wisp of a city that is Tagaytay. Located in Cavite, perched atop a ridge, Tagaytay offers the most splendid views of Taal Volcano – the world’s smallest.

There are also several golf courses on the area with amazing views.

Aptly called “The Rock,” Corregidor lies at the mouth of Manila Bay. This tiny island was the scene of much fighting between the Filipino-American forces and the Japanese during World War II. Today, it is a hauntingly historic tourist attraction.

The area of Laguna around Los Banos trades heavily on the health properties of its hot springs, which bubble from the lower slopes of Mount Makiling.

The dormant volcano of Mount Makiling is identifiable by its shape – like a reclined woman whose spirit is said to protect the place.

Francis Ford Coppola chose Pagsanjan Falls, 80 kilometers southeast of Manila, as the location for the final scenes of apocalypse now. Today, tourists come here to shoot the rapids, especially during the rainy season when they are most thrilling.

Feast of the Black Nazarene – January 9

Sto. Nino Fiesta of Tondo – January 15; A procession of a hundred Sto. Nino images participated in by the people of Tondo. Street dancing is the highlight of the celebration.

WHERE TO GOLF IN MANILA

If you are from out of town and want to play golf directly in the city. Here is a list of the more popular public golf courses that are available.

HOW TO GET TO MANILA

International flights to Manila are available from different key cities around the globe.

HOW TO GET AROUND

Public utility vehicles such as buses, jeepneys, tricycles and cabs are available for use.