Who says golf is a serious, boring sport? If it’s like that, how come a lot of people are getting hooked to it everyday? Avid golfers know that the game brings about a whole new different kind of joy. It’s a sport that once you are able to love, there’s nothing on earth that can cause you to stop. Well, that may be an exaggeration, but just for laughs, here are some good, old golf jokes that show how far people can go all for the love of the game. 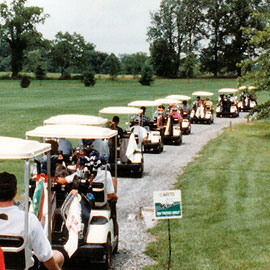 At a Lamaze class full of pregnant women and their partners: The instructor was trying to teach women proper breathing and at the same time, informing the men how to give assurances during this stage of the plan.

The teacher then announced, ” Ladies, remember that exercise is good for you and walking is especially beneficial. So, gentlemen, it sure wouldn’t hurt you to take the time and walk with your partner!”

The room suddenly got quiet. After a moment of silence, a man sitting in the middle of the group raised his hand.

“Would it be alright if she carries a golf bag while we walk?” 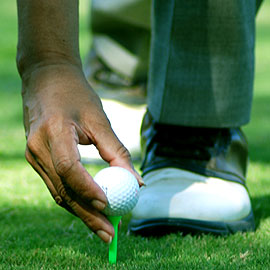 Arnold got home unusually late and very tired from his Sunday round of golf.

His wife asked him, “Bad day at the course?”

“Everything was going out perfectly fine,” he said. “Until Jack had a heart attack and died on the 10th tee!” 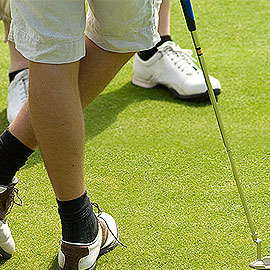 As he hit off the seventh tee, Joe sliced his shot deep into a wooded ravine. He took his eight iron and clambered down the embankment in search of his lost ball.

After many long minutes of hacking at the underbrush, he spotted something glistening in the leaves. As he drew nearer, he discovered that it was an eight iron in hands of a skeleton!

Joe immediately called out to his friend, “Jack, I’ve got trouble down here!”

“What’s the matter?” Jack asked from the edge of the ravine.

“Bring me my wedge,” Joe shouted. “You can’t get out of here with an eight iron!” 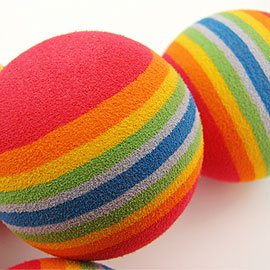 After a life of seemingly great and sound golf, Ray finally experienced the worst round of his life.

Not able to accept it, he gloomily enters the locker room, grabs a fresh razor, climbs into the showers and slits his wrists to die in a stream of water and blood…

Just after doing the deed and slumping down in the flow ready to die, a buddy comes in and yells “Hey Ray, we need a fourth tomorrow!”

Fred holds his wrists together and yells back, “What time?!?”

Want to read more? Check out the links below

FA Korea Country Club
Drinks and Links: GolfPH Christmas Party and Networking Event
Golf is For Women Too: Four Things to Do to Love Golf