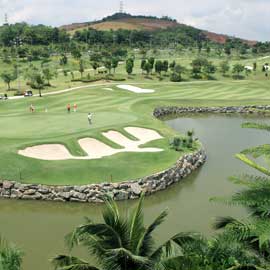 Golf had its humble beginnings when an ancient Scotsman picked up a stick and used it to hit stones into holes. Since then, it has become one of the world’s most captivating and addictive sport. No wonder you’ve been playing golf at least twice a week and never missed a chance to watch tournaments on TV. The thing is, how much do you actually know about golf? Prove yourself an expert and test your knowledge about the game. Take this short trivia quiz about golf to find out!

(1) What is the maximum number of golf clubs can you bring in a game?

>> C. Although a typical set consists of only 12 clubs (have three woods, seven irons, a wedge and a putter), rules of golf actually allow players to carry as much as 14 clubs in their bag. This means you can add another wedge or a specialty hybrid.

(2) How many strokes is an albatross?

>> C. You have every right to celebrate when you get an albatross for a score in a hole. It is a very rare score just like how the Albatross is a very rare bird. For golf it simply means 3 under par and is actually better than an eagle (2 under par). The term was first coined when the golfer Gene Sarazen made a “shot be heard around the world” during the 1935 Masters Tournament.

(3) During “tee off” how should you tee your ball?

>> D. Different markers are placed at the tee box to make the play more fair and pleasurable for all golfers. However, according to the rules, a player must never tee the ball up in front of the markers. Instead, it should be done directly between the tee markers and no more than two club lengths behind them. As a matter of fact, during a stroke play, you’ll get a two-stroke penalty if you violate this rule.

(4) The Masters is held during what month?

>> B. The Masters Tournament, one of the four major championship events in professional golf is scheduled every first week of April. As compared to other majors, the Masters is the only event held at the same location every year, at the Augusta National Golf Club in Georgia USA. Win the Masters and you get to wear a highly-coveted green jacket worn by past champions like Fred McLeod, Arnold Palmer, Gary Player, Jack Nicklaus and Tiger Woods.

>> A. Golf historians believe that the word caddie was first used by Mary, Queen of Scots who herself was an avid golfer when she was a young girl. While she was still in France for her schooling, she had young men called “cadets” (pronounced as “cad-day”) carry her clubs for her. So the next time you talk to your caddie, remind yourself of their humble, yet royal beginnings.

(6) If your ball lies in the way of another player’s shot on the putting green, what do you do?

A. Be the first to make your next shot
B. Mark your ball
C. Move your ball about a club length away
D. Pray it doesn’t get hit

>> B. Much as you pray for your ball not to get hit, there’s a high chance that it will be, so the best (and right) thing to do would be to mark your ball. It is done by placing a coin or any other falt marker directly behind your ball before picking it up. Once it’s your turn, place your ball back to its original position then remove the marker.

A. a yellow golf ball used in a tournament
B. a special clubhouse drink
C. a golf ball that has split in half after you hit it
D. a bad golf shot

>> D. Banana ball is in fact, a slang term for a bad golf shot usually called a slice wherein the path of the ball uncontrollably curves like a banana. Other seemingly delicious, but bad shot you must avoid include the “chili dip”, which happens when you hit the ground before making contact with the ball; and “whiff” which means missing to hit the ball when you make a stroke.

So how well did you score?

These other related articles might be helpful to you