The Best Fixes for the Short Game Yips

One of the hardest swing faults to fix in the game of golf is the short game yips. Every week on the biggest stages in golf there are examples of players who can hit perfectly struck golf shots from 200 yards, but can’t seem to hit a pitch from 20 without looking foolish.

The short game yips can be one of the hardest faults to overcome because of the mental effects hitting a shockingly poor chip shot can have on a player. Even when taught the proper technique, there is still the residual fear effect of hitting a poor shot that arises in a round of golf. The following are my go to drills to help someone improve their short game both technique wise and then to help them transfer it to the course:

Swinging the Club On Plane

This is easily the first thing that I look at with my players who are struggling with their short game. Most golfers know that they need to swing the club on plane during a golf swing, but they forget about this fact in the short game, mainly because the swing is so short. The yips are caused by a manipulation of the club head that the body feels it needs to make to hit a solid shot. If the club is traveling on plane, then the club will return to the golf ball without needing any manipulation. In most cases, I see the golfer swing the golf club under plane which then allows the club to bottom out to soon behind the ball leading to chunks and bladed shots. Below is an example of a good pitching motion from 30 yards where the club swings naturally on plane. 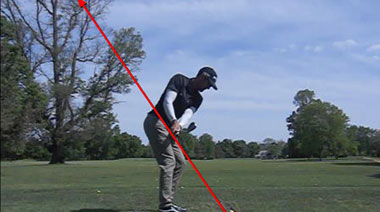 In this photo of one of my professional students, he has taken the club back on plane. If the swing were to continue he would hinge the club up just like his full swing. 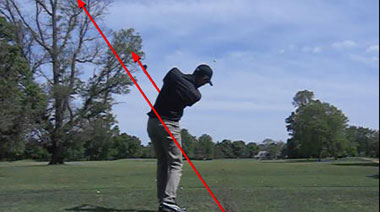 Here the golfer has allowed the club to swing through impact and into his finish as he pivots his body to face the target.

One of the first things that is taught to golfers is that in the short game, your hands must lead into the shot for a chip or pitch so the club will have a descending blow into the golf ball allowing for ball first contact. What happens when you apply this method of chipping is the margin for error becomes surprisingly small. You must place the club on the back of the ball precisely to achieve the desired result. What I prefer people to master is their ability to return the club head to the ball just like they had it set up at address. This would mean if they were hitting a low shot with the ball back in the stance, then the hands would be ahead slightly, but the student wouldn’t want to manipulate any more forward movement with their hands. If the student were hitting a high shot with the ball a little bit more forward in the stance, then the hands would be even with or possibly behind the golf ball. Again, the student would want the club and hands to return to the same alignment as they were at impact so that would mean the club would be ahead or even with the hands.

What this creates is a wider bottom of your swing arc both in front of and behind the ball where the club can travel and still make above average contact for a short game shot. 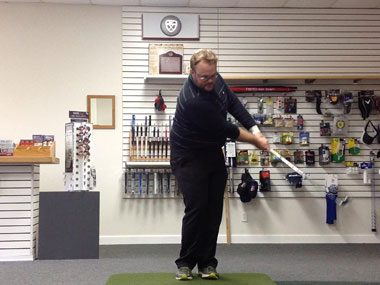 This is an example of the classic way to hit a short game shot that is taught to a lot of beginning golfers. This technique will lead to problems with clubhead manipulation in the stroke. 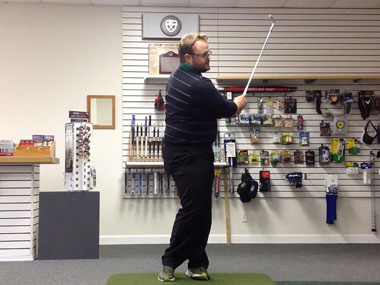 In this instance, the clubhead has been allowed to swing, which depending on the desired trajectory, may mean that the hands are not ahead of the golf ball. Let the club swing through the shot, don’t try and control the shot by forcing your hands forward.

There are plenty of other technical aspects that can be looked at with the yips, but these are the two most common that I see and then fix to help golfers improve their short games.

One last bit, even if you fix technical aspects in your golf game to get rid of the yips, the mental ramifications will still linger without some dedicated practice drills to help you feel better. These are my two favorite:

Most times when I teach golfers to let the club head swing through a short game shot, they become timid about swinging the club with any speed. Their instincts are to control the clubhead so they will make a big backswing and then try and control how fast it is going through impact. Instead what I would like to see is my students make a backswing that is even with about their right leg, the club will still be low to the ground. Then I want them to accelerate the club through to about a full finish letting the club head swing through the ball and past their hands. They will be amazed at how much speed they can generate with ease and how they can control the height and distance of the golf ball.

You must simulate pressure in your practice to start to feel comfortable with any new technique, but especially your short game if you are coming off the yips. Find a friend or multiple friends and pick a location. Each player will hit one shot and whoever is closest earns a point. If someone holes it they earn 5. The goal is to be the first player to 21. You can play with busts or if you don’t have a lot of time you can adjust the point values, but the point is to compete while trying to master your new technique. If you need more pressure, bet on who buys dinner to add some extra incentive to the mix.

The short game yips can be a mystery to many golfers and as a teacher there is no set agenda for helping someone improve this issue. But for me, the above drills have been a great place to start to help people rid their fear of the short game and learn to love it again.

Scott Hogan is a PGA Class A Certified Professional and is also a recipient of the GRAA Top 50 Growth of the Game Teaching Professionals award for 2014. His style of coaching has helped golfers breakdown barriers and shoot their lowest scores ever.
Scott is the author of “The Journey to Understanding” which is available for Kindle on Amazon. He is also an Assistant Coach for the United States National Junior Team. For more information about Scott, please visit www.scotthogangolf.com or click here to read his full profile.