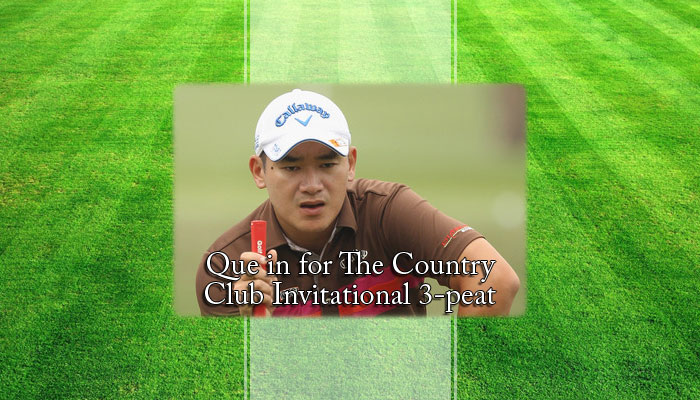 A golf battle of epic proportions is expected to be seen at The Country Club Invitational in Laguna this coming Thursday, as tourney favorite Angelo Que hopes to win his third crown from the yearly challenging local golf championship. Being the only holder of a back-to-back win in the prestigious tournament, Que hopes that luck will shine his way in the championship.

Que may have to fight his way this year, with an impressive line-up of talent against him and hoping to foil his race to the crown. A top contender that he’ll be facing is no other than holder of the Order of Merit, winner of the Players’ Player of the Year Award, and Asia’s No. 1 Juvic Pagunsan, who’ll be doing all he can to show why he deserves such a title.  Frankie Minoza, local golf’s living legend is also set to show his tried and tested vintage form, which can turn the field into a topsy-turvy fray. Out for a vengeance is Artemio Murakami, 2009 winner who has slowly but surely started to heat up during the latter part of last year.

The Country Club Invitational is already at its 10th year. Selected 36 players are to battle it out for the prized crown, with total prize funds ranging up to 4.5 million pesos.