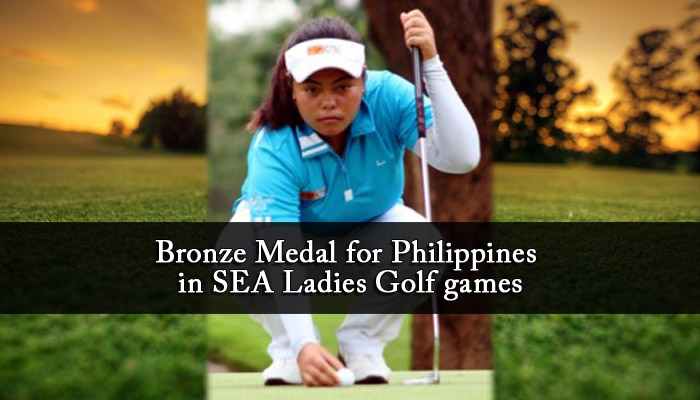 Two consecutive birdies on holes 5 and 6 at the Jagorawi Golf and Country Club guaranteed the Philippine’s Dottie Ardina a bronze medal in the 26th Southeast Asian Games (SEA). Ardina was up against Indonesia’s Juriah, which was supposed to be medal shutout for the Philippine’s ladies golf.

The narrow fairways and roughs around the greens in the Jagorawi Golf and Country Club New Course provided a difficult challenge for the Philippines, in that the county was under no contention for a medal in a 36 hole tourney. The one-hole playoff between Ardina and Juriah proved otherwise, with the Philippines slightly edging Indonesia’s 75 with a 72. Still, host country Indonesia grabbed the crown with a 439, with a 69 by Tatiana Widjaya for an individual gold medal finish.

Ardina’s squad (mentored by Bong Lopez, with Chihiro Ikeda and Andrea Unson as team members) scored for a total of 444, landing them fourth in the category. The Philippine lady golfers team won the crown in the previous tournament held in the 2009 Laos SEA Games, with Ardina, Ikeda and Mia Piccio as a then powerhouse unit.

The men’s competition was a lopsided deal, with the Philippines losing the bronze medal to Malaysia. Thailand won gold, with Indonesia following closely.