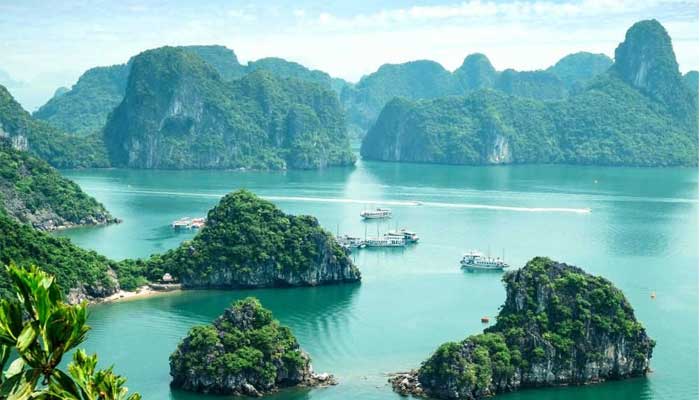 A land of staggering natural beauty and cultural complexities, of dynamic megacities and hill-tribe villages, Vietnam is both exotic and compelling.

Vietnam is one of Southeast Asia’s most beautiful countries, attracting travellers to its lush mountains, bustling cities and golden sand beaches. Despite rapid modernisation in Vietnam’s urban centres of Hanoi and Ho Chi Minh, time-honoured traditions remain intact amongst the locals. There are numerous ancient landmarks and colonial structures that have survived throughout the bumps and scrapes of history.

If this is your first time in Ho Chi Minh City, knowing exactly what to do can be a challenge as this large city is filled with unique landmarks. Also called Saigon, it’s widely known as Vietnam’s business and financial hub, as well as a popular tourist destination. Travellers love its fascinating culture, classic French architecture, and sleek skyscrapers, as well as ornate temples and pagodas. You can also find plenty of rooftop bars and fantastic restaurants serving cuisine from all over the world.

Visit Cu Chi Tunnels – This marvellous tourist attraction lets visitors experience what it must have been like for soldiers who used an extensive network of tunnels to move around undetected by their enemies. There is an informative movie to watch, followed by a guided tour of some mock recreations of daily life for the Viet Cong hiding in the jungle.

Relax and enjoy the view at Bitexco Tower and SkyDeck, an ultra modern office tower in Ho Chi Minh, with a characteristic oval extension which acts as a helicopter landing pad. Standing at 262 metres tall, this 68 storey building is the highest in all of Vietnam with a sky deck offering 360 degree views of the city and surrounding area as well as a fantastic sky bar called Alto where you can see all of Ho Chi Minh while enjoying a cocktail and some tapas style international dishes.

Prepare to be amazed by Vietnam’s cuisine. Vietnamese food is known to be both healthy and robust in flavour, thanks its generous combination of fresh herbs and greens, paired with rice, noodles, seafood, pork and beef.

Nightlife in Ho Chi Minh means very different things depending on where you are in the city. Downtown in District 1, rooftop bars, high rolling casinos and smooth jazz bands are the choice forms of nightlife entertainment in Saigon.

IT’S NO SURPRISE THAT PEOPLE LOOK TO THE OUTSKIRTS TO GET AWAY AND EXPERIENCE HO CHI MINH GOLF COURSES!

The layout and design of both golf courses is very natural and gives the feeling the golf course has been part of the land for hundreds of years. The West Course, which played host to the Vietnam Open in 1995 and 1997, has tree lined fairways and quick, flat greens. Thanks to the oil palm trees which surround the course, tee shots can be a challenge to the narrow landing areas on the fairway. Look out for lone trees in the centre of several fairways as you will be surprised how many people end up with an awkward shot thinking there was no way they would be unlucky enough to see their ball sit close to the trunk.

Song Be translates as ‘little river’ so it will come as no surprise to find 10 lakes throughout the golf course, with water coming into play on almost half of the 18 holes. The 10th hole is a real beauty and if you get nervous when playing around water you will need to take a deep breath before teeing up and aiming your shot for the fairway, which is situated between two lakes. With undulating greens and mature trees lining the fairways throughout the course, you must be accurate off the tee to avoid a difficult second shot. Song Be Golf Resort is one of the best golf courses in Ho Chi Minh, especially if you like to walk during your round.