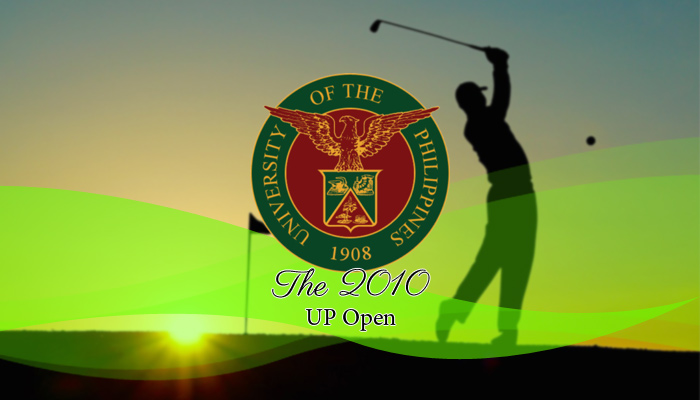 The University of the Philippines Golf Team (UP Golf), having reorganized after fifteen years, is now on its second year, and is taking on the challenges of restarting with a good drive. UP is known not only for producing academically-equipped graduates, but ones who are well-endowed with the gift of sports as well. With the combined efforts from the coaches, players and various sectors in and out of the University, UP Golf has managed to rise from its absence and is now aiming to give the glory back to the sport.

In line with UP Golf’s vision of developing the golfing scene in the country, UP Golf has put up The 2010 UP Open. It will be the first golfing tournament to be hosted by the Team. The 2010 UP Open will be held at the Amber in the Fort and South Course, Valley Golf, and will have a launch party and fashion show on the 12th of November at Amber Ultralounge in the Fort, and the tournament itself will be on the 19th of November. The tournament will cater for 250 players with a courtesy fee of Php 2000 for members and Php 2500 for non-members. And if you want to join the team competition and win a prize of Php10,000, just add Php3,000 for a team of 5 players or more. Its proceeds will benefit Gawad Kalinga, the UP Alumni Association, as well as the budding, self-sufficient UP Golf Team. The tournament will follow the System 36 format and on-course registration will start at 6 a.m. on the day of the tournament itself from 6 a.m. to 10 a.m. Even if the real victory is in making that hole, prizes and trophies will be rewarded to the winners at 5pm in the Founder’s Hall.

The 2010 UP Open is still accepting sponsors as it promises to garner wide participation from both new and experienced players of the sport. Teams are invited to register now in order to avoid complications in technicalities and procedures. The UP Golf Team promises nothing less than a great day for golfing. For inquiries, please contact Joanna Lim at 09174146829 or at [email protected]

And of course to our media sponsors: A Round of Golf, UNTV, Clickthecity, and GolfPH.