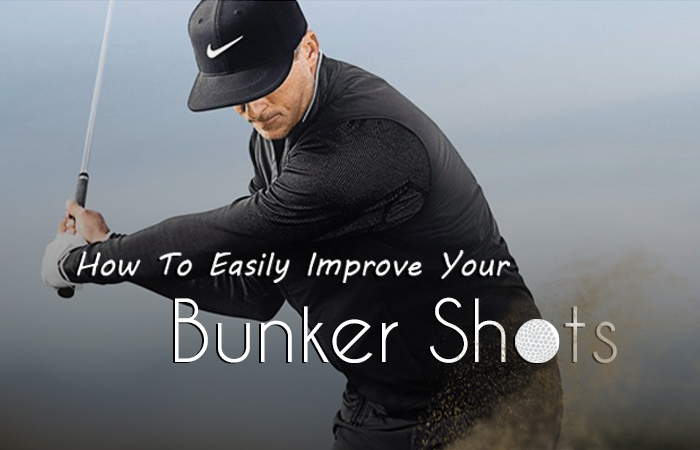 Learning to play golf can be a frustrating experience. Especially when it comes to hitting it out of the sand. In theory, sand should be one of the easier surfaces to play but many amateur golfers tense up and everything goes wrong.  Here we look at how to improve shots from a bunker.

When it comes to hitting out the sand successfully, the technique is at the heart of the process.  Many amateur golfers step up to the ball with an open stance and have a closed wrist.  They hit the ball as hard as possible with a really aggressive swing and what happens?  The ball ends up in the bunker next door.

The first tip to having a great level of success with sand shots starts with something simple – relaxation.  If you talk to PGA professionals, they will all say that the biggest problem golfers have when hitting out of sand is that they swing too hard and too aggressively.  Their mind-set is that they need maximum power to get out of the sand and this causes the mechanics of their swing to fall apart.  Hence the trip straight to the next bunker rather than the green.

What is actually needed is that the golfer needs to relax.  Slow down the speed of the swing back to its normal tempo and make sure the body is aligned correctly to the target.

Stand a little further from the ball because if you are right on top of the ball, the resulting swing will be too upright.  Open up the clubface so that it is pointing right at the target in an open position, as this adds lift to the shot and gets the ball up and out of the bunker.

Next take the club back low.  Be careful not to touch the sand, as grounding in a bunker will get you a two stroke penalty.  So instead you hover the club behind the ball, focusing on making sure you are close to the surface on the backswing.  The result will shallow out the motion and the path of the club.

As you go through the shot, make sure you turn your body.  This is one of the fundamentals that golfers of all levels forget – turning your body is crucial to finishing the shot.  Pick a spot behind the ball, around two inches away and swing through to the spot, rather than into it.  You should finish with your chest facing the target of the shot while your arms are in front of your body.

The key to improving shots from a bunker for any level of handicap is remembering the basics and the proper techniques you have picked up.  The fact that you hit through sand to hit the ball shouldn’t affect how you play the shot – stick with the swing that works and allow the club to the rest of the work for you.  Relax and swing at your normal speed to see the ball fly in the direction you want it.

Since starting golf at the age of 11, golf has been a huge passion for Andy. So much, that in 2007, he decided to quit his job and start a golf fashion clothing and footwear company from his bedroom full time.
Andy is now the proud owner/director of Golfposer.com, an international golf designer apparel and footwear company based in Linlithgow, Scotland.