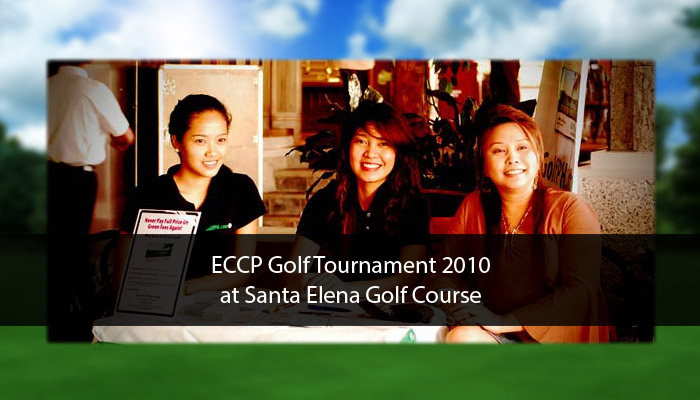 The European Chamber of Commerce of the Philippines (ECCP) held its annual Golf Challenge last May 24, 2010 at the Sta. Elena Golf Club. Everyone who’s anyone was present at the ECCP Golf Challenge, which is already on its 11th year and is considered to be one of the biggest tournaments in the business community.

Salt and Light Ventures, the leading and most awarded events company in the Philippines, gave GolfPH.com an opportunity to be a part of this annual event. Both GolfPH.com and Salt and Lights Ventures sponsored hole #5 and was there to promote its VIP card that gives you access and discounts to most of the popular golf courses and pro shops in the country.

The GolfPH.com team was up and running as early as 5 am at the location, while some of the golfers were either already having their breakfast or warming up at the driving range. By 8am, the ceremonial tee-off was held, initiated by the ECCP executives, signaling that it was a start of a would be successful event.

The tee-off kickstart was followed by the official start of the game, with the golfers eagerly heading off to the different holes, intent on putting their best efforts to win prizes and have a challenging game of golf with their colleagues.

It was surely a great experience for GolfPH.com and for all the participants to be a part of this event. GolfPH.com is looking forward to seeing all of them again next year. See you in the fairways soon!