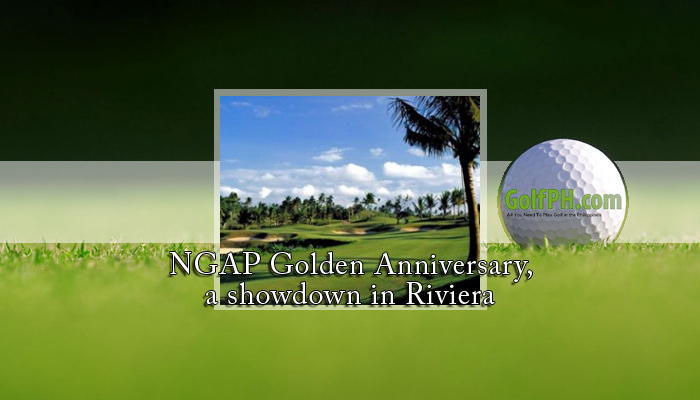 To celebrate its 50th Golden Anniversary, The National Golf Association of the Philippines (NGAP) will hold an 18-hole fellowship tournament in the exciting and majestic Riviera golf course in Silang, Cavite, on December 15, 2011. The tourney will be a challenging showdown of talent, with players ranging from current and former NGAP members.

The gathering of NGAP golf talents will face a a three-man competition format, wherein the Gross Modified Stableford Points scoring system will be used. Also, special awards are at stake in the tournament, with prizes to be presented to individual players garnering the highest scores in the game. NGAP players to join in the anniversary tournament will be divided into regular, seniors, super seniors and ladies categories. Tee off time of the NGAP tourney will be from 6:30 A.M. to 8:30 A.M.

As part of the 50th Golden Anniversary, the said tournament will honor the association’s past presidents, with a special entry on acknowledging Filipino Golf Legends who have brought fame and prestige for the country. Other special awards to Filipino Golf personalties will be posthumously awarded during the event.

The NGAP 50th anniversary tournament is being managed by the association’s current board, led by its chairman, Rod Feliciano.